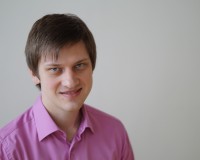 He made his opera debut conducting “Iolanta” by Tchaikovsky in St.-Petersburg Opera House.

In season 2012-2013 he was a Music Director of Karaganda State Musical Theater where he conducted a large amount of operas and operettas, such as Verdi’s “La Traviata”, Rossini’s “Le Barbier de Seville”, J. Strauss’s “Die Fledermaus” and “Der Zigeunerbaron” and so on.

In the season this year (2016) he has opened performances with ballets “Giselle”, “Swan Lake” and Symphonic concerts with Mariinsky Orchestra during The First Far-East Festival (Artistic Director – Valery Gergiev).

Mariinsky Theater Primorsky Stage, he is currently at, he conducts an extraordinarily large number of repertoire, such as “Eugene Onegin”, “Carmen”, “Nutcracker”, “Tosca”, “La Traviata”, “Il Corsaro” and many others.