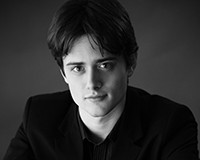 Born in 1990, Péter Dobszay is one of the most remarkable conductors of his generation. Recently, he conducts the Szolnok City Symphony Orchestra while as an organist he works for the Dohány Street Synagogue Budapest and the Holy Angels Church in Gazdagrét district of Budapest. Dobszay is considered the most versatile musician today at the Hungarian music scene.

He makes concert tours worldwide including Japan, Israel, Germany, Switzerland, the Czech Republic, Romania, Austria and Macedonia, performing at the most renowned concert venues such as the Stephansdom in Vienna, the Holy Grave Church in Jerusalem, the Great Hall of the Music Academies of Geneva and Leipzig, along with prestigeous Hungarian concert halls such as the Palace of Arts Budapest, the Great Hall of the Liszt Ferenc Academy of Music and the Pécs Kodály Centre.

His proficiency in conducting has been based on the education that his professor, Zsolt Hamar provided him during his studies. Furthermore, he was accepted to participate in the Gifted and Talented Education program of the Music Academy, serving to help young artist to take the first steps towards their international career. At the Department of Conduction, he became a student of András Ligeti, Tamás Gál and Ádám Medveczky. In the fall of 2014 he took part in the master course of Péter Eötvös.

In March of 2015 Péter Dobszay performed at a highly praised full house graduation concert in the Great Hall of the Music Academy with the excellent Hungarian Concerto Budapest ensemble.

In 2016, more than one million television viewer had the opportunity to follow on Duna TV channel his New Year gala concert broadcast from the Szolnok Szigligeti Theatre.

Mr Dobszay places a great emphasis on presenting new music at the concert halls; he conducted a number of world premiers of contemporary works. He enjoyed contributing to the debut of the „Studio 5” composers’ band ath Solti Hall of the Music Academy, in 2017.