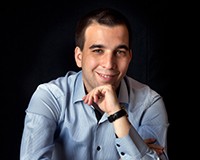 Dániel Erdélyi, cantor of the Reformed Curch Congregation in Pécs-Kertváros, Hungary, is considered one of the most gifted young Hungarian conductors.

Erdélyi was born in 1988 in Pécs. He started his musical studies in his hometown. He graduated as an organis from the Liszt Ferenc Academy of Music in 2011, simultaneously pursuing his studies in conducting, under the guidance of András Ligeti, Tamás Gál and Péter Erdei.

His talent and commitment to music revealed itself at his young age: Erdélyi has been awarded at various national organ competitions, while as an orchestral and choral conductor, he won first prizes and special awards at a number of national and international contests, including: National Competition of Young Choral Conductors, 1. Prize; VI. Edition International Competition of Young Choral Conductors, Special Award; Lantos Rezső National Choral Conducting Comptition, 1 Prize and Special Award. At the Golden Baton International Conducting Competition he was qualified for the semi-finals. In 2012 he got scholarship of the Keimyung University Foundation, Korea. In 2016, he win Junior Prima Award which is the most prestigeous professional awards for young talents in Hungary.

To improve his conducing skills, he has attended several internationally renowed master courses.

Since his graduation, Erdélyi participates actively in the music life of Hungary, being invited to conduct by a number of orchestras of the country. Since 2014, he has been working as a musical assistant at the Hungarian State Opera, in 2015 he was appointed to the position of music director and conductor at the Symphony Orchestra of Budapest University of Technology and Economics. He is the founder and conductor of the Central Reformed Curch Choir.

As a hobby, he works as a referee for the Hungarian Football Federation.