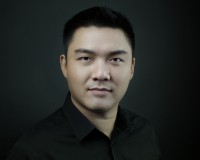 Chinese conductor Junping Qian is currently studying orchestra conducting in Musik Hochschule Hanns Eisler in Berlin under Pro.Christian Ehwald and Hans-Dieter Baum. He was a prize winner of Delun Li China National conducting competition in 2012. He graduated from Curtis Institute of Music in 2013 and Middle School Affiliated to Shanghai Conservatory in 2009. He has also studied conducting with Mark Gibson in University of Cincinnati and Michael Jinbo in Pierre Monteux Conducting school in Maine. He was a private student of the legendary pedagogue Otto Werner Mueller. He is mentoring by British Conductor Daniel Harding since 2014.

As a conductor, his first appearance as a conductor is at 10 years old with the school choir. He was the assistant conductor of Shanghai Youth Orchestra of the Shanghai Conservatory from 2008 to 2009. He made his debut with the Curtis Symphony Orchestra in 2009 with Dvorak symphony no.9. He was the music director and conductor in the Chinese movie‘The Allure of Tears’, which was produced in 2011. He had conducted several concerts in China with the Kunming Symphony Orchestra and Qingdao Symphony Orchestra. He made his European conducting debut at Verbier Festival in summer 2012. ‘He has such a simple and natural technique’, commented by Swiss conductor Charles Dutoit. He has helped established the Shanghai Festival Symphony Orchestra in Summer of 2013. In Spring of 2014 he was invited by the Cincinnati Chinese society to conduct the Chinese new year concert in Cincinnati and was re-invited by the Curtis Institute to conduct a chamber orchestra concert. Since he moved to Europe in 2015, he has conducted orchestras such as Konzerthausorchester Berlin, Brandenburgisches Staatsorchester Frankfurt (oder), die Neubrandengurger Philharmonie, Berlin Sinfonietta, Swedish Radio Symphony Orchestra, Die Sächsische Bläserphilharmonie, Shanghai Youth Orchestra of the conservatory, St. Petersburg Chamber Philharmonie, Radom Chamber Orchestra and Thessaloniki Symphony Orchestra. He was invited to conduct the New Year Concert in Toronto with the Toronto Festival Orchestra in January 2017. Since 2017, he became the resident conductor of the Diplomatic choir Berlin.

He is an achieved violist as well, he is the recipient of many prizes and scholarships, includes 2nd prize winner of 2006 Washington Johansen International Competition, 1st prize winner of 2007 China National Viola Competition and 2008 MMB Chamber Music competition and etc. As a violist he had performed in almost every prestigious concert halls all over the world. In summer of 2016, he quit his tutti position in Swedish Radio Symphony in Stockholm which he had won in April 2014.