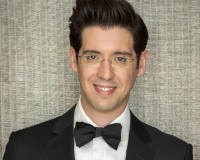 At The Lyric Opera Company of Guatemala, which he Co-Founded in 2016, he commissioned and performed nationally-televised original productions of Rigoletto and L'Elisir d'Amore. In 2017-18 he will conduct a new production of La Bohème with the company, as well as Verdi’s Requiem in collaboration with the Guatemala National Symphony Orchestra.

As a guest conductor, Mr. Pfeffer has recently collaborated with the Mariinsky Orchestra, The Juilliard Orchestra, The Guatemala National Symphony Orchestra, and The Symphonic Orchestra of the State Capella of St. Petersburg.

Mr. Pfeffer is an active concert pianist, whose career highlights included solo recitals at Carnegie Hall’s Weill Recital Hall; performances of the music of Chopin on the stage of The Metropolitan Opera in American Ballet Theatre's production of The Lady of the Camellias; a nationally-televised solo recital from the Russian Kremlin; and solo appearances with the Israel Philharmonic Orchestra among other orchestras.

Mr. Pfeffer is dedicated to promoting dialogue between Arabs and Jews in his native Israel. In 2009 he presented a concert in honor of peace at Carnegie Hall's Weill Recital Hall, benefiting the Jezreel Valley Music Center, in which Arabs and Jews study music together. The center was struggling with financial difficulties, and the performance helped raising funds that prevented it from closing. Mr. Pfeffer is honoured to have received the Davis Projects for Peace Award for this initiative.

Mr. Pfeffer is a recent graduate from The Juilliard School in New York City, where he was a student of Alan Gilbert. At Juilliard he was a recipient of the Bruno Walter Scholarship, the Charles Schiff Conducting Prize and the Norman Benzaquen Career Advancement Grant. He is also a graduate of Mannes College of Music and of The Metropolitan Opera's Lindemann Young Artist Development Program. Among his teachers were Pnina Salzman, Victor Rosenbaum, Richard Goode, David Hayes, Alan Gilbert, and James Levine.