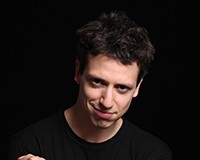 Praised by composer George Crumb for his "sensitive and insightful interpretation", conductor Paolo Bortolameolli brings a visual, synthetic and collaborative approach to music that is infused by his fascination for and interplay among the arts. With his passion for connecting the 21st century audience to the concert stage, Mr. Bortolameolli enjoys conducting orchestral music, working with youth orchestras, collaborating with today’s composers, lecturing and writing.

Recently he has his debut with the LA Phil in a concert of the ‘Symphonies for Youth’ series. As Assistant Conductor of Yale Philharmonia, he collaborated with conductors such as, Peter Oundjian, Xu Zhong, Jahja Ling, Shinik Hahm, William Christie and Helmut Rilling.

He was also Principal Conductor of the New Haven Chamber Orchestra during the 2012-2013 season.

In 2013 has a major professional debut along with Orquesta Filarmónica de Santiago (Chile), celebrating the Centennial Anniversary of the premiere of the Rite of Spring in a performance acclaimed by the public and the critic (Special Award from the Chilean Critics Association).

During the following 10 months he debuted in front of every major orchestra of his country including: Orquesta Sinfónica de Chile, Orquesta

He has worked with internationally renowned soloists such as Ray Chen, Lucas Macías Navarro, Pacho Flores, Yuzuko Horigome, Kun-Woo Paik, among others.

Also in Chile, where he was named 100 young leaders of the country (Sábado Magazine, 2007), Mr. Bortolameolli was the Principal Conductor of the Youth Orchestra Orquesta Sinfónica Juvenil de Colina (2009 – 2011).

In 2011 he made his international debut as guest conductor of the National Symphonic Orchestra of Perú .

Enthusiastic about new music, he frequently collaborates with young composers. Some highlights are the his recent collaboration with The Industry Opera company in LA, the world premiere   of Matthew Barnson’s The Rule and Exercises of Holy Dying at Zankel Hall in Carnegie Hall (2013), two operas by Yale composers Justin Tierney and Mathew Welch as part of the Experiment in Opera Company, and his participation on the American Composers Alliance's Opera Scenes Evening at Symphony Space, New York.

In 2013 he was at the head of RITE/NOW Project, a concert held in November of the same year at Woolsey Hall (New Haven), which with visual components   and the premiere of a symphonic work he commissioned especially for this occasion, celebrated the centennial anniversary of Stravinsky’s ‘Rite of Spring’.

He is also the creator of 'PONLE PAUSA', supported by FundaciónCorpArtes and Fundación Ibañez – Atkinson, a project that seeks to revolutionize the concept of music education through the implementation of short videos and a concert targeting social network users.

Mr. Bortolameolli has attended master classes working with leading conductors including Bernard Haitink, Neeme Järvi, Pavo Järvi, Leonid Grin and Peter Oundjian. Twice (2013 - 2014) participant in the Lucerne Festival Academy where he could work along with the Festival Strings Lucerne, in the Järvi Summer Festival and Academy (Estonia) where he conducted concerts with the Pärnu City Orchestra and Estonian National Youth Orchestra, the Jorma Panula Masterclass at El Escorial in Madrid and the Mozarteum Sommerakademie where he worked with professor Peter Gülke.

In 2013 he was personally invited by Maestro Bernard Haitink to attend his Master Class at the prestigious Tanglewood Music Center.

An accomplished pianist, Paolo won in 2003 the first prize of the National Chopin Competition (Chile) and in 2005 the National competition for Young Soloists playing Tchaikovsky Piano Concerto Nº1 along with the Orquesta Sinfónica de Chile.

Mr. Bortolameolli is Master of Music in Orchestral Conducting from Yale School of Music (Maestro Shinik Hahm - 2013) and Graduate Performance Diploma from Peabody Institute (2015) where he studied under the guidance of Gustav Meier and Markand Thakar.

He graduated from the Arts Faculty of University of Chile (Maestro David del Pino Klinge 2011) and from Universidad Católica de Chile where he studied piano with Professor Frida Conn.