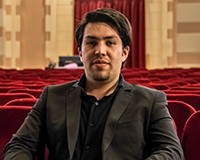 Ricardo Arzate-González was born in Toluca, Mexico. In 2010, he was awarded first place in

the Young Performers of Toluca Competition in Mexico, winning a scholarship to continue his

In 2015, he graduated as a conductor from the Milan Conservatory. Ricardo Arzate González

has studied composition with Gabrielle Manca, piano with Gerardo Urban and orchestral

conducting with the Italian conductors Vittorio Parisi and Daniele Agiman, and the Japanese conductor Yoichi Sugiyama. He was selected by the Milan Conservatory to participate in the masterclass taught by worldrenowned, Italian conductor Gianandrea Noseda, where he was chosen by the Maestro Noseda to conduct the closing concert.

A gifted opera conductor, Maestro Arzate-González made his opera debut with "Don Pasquale"

at Teatro Nuovo di Torino. Ricardo Arzate-González possesses talent, great musicianship and a solid personality proved on numerous stages, such as the "International Festival of the Music MITO (Milano-Torino)" with the orchestra "I pomeriggi musicali", the “Sala Verdi” in Milan, “Teatro San Babila” and “La Sala Puccini”.

He has also demonstrated his talent for conducting operas on the stages of the Verbania, Asti,