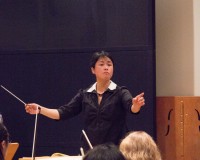 Chi-Chen Madeline TSAI enjoyed a very varied and solid musical education in her native Taiwan, beginning with piano at age five and adding percussion, choir and voice education over the course of her childhood. She earned her BFA Degree in Percussion performance from the Taipei National University of the Arts. Further studies led her to the US and Europe where she studied organ with Ken Cowan(USA) and Martin Haselboeck(Austria) and earned her Master of Music degree at Westminster Choir College of Rider university, majoring in both Church music and Choral Conducting.

From 2009 to 2012 she participated in master classes in orchestral conducting with Jorma Panula,

Ms. Tsai began her orchestral conducting training with I-Ming Huang (winner of the Concours Besançon). In 2005, she received several graduate assistantships at Westminster Choir College of Rider University, NJ, USA, assigned as an assistant Conductor and a pianist for ensembles. In addition, starting in 2006, she was appointed as a music director of Six Mile Reformed Church, NJ, USA, until 2010. Meanwhile, she was also a staff pianist in American Repertory Ballet and Princeton GirlChoir, NJ, USA, as well as guest conductor in various US Orchestras.

In 2011, Madeline was awarded the highest distinction in the St. Petersburg Chamber Philharmonic masterclass with a prize winners’ performance at the final concert. In 2016 she won 3rd prize in the Prof. Dichler Conducting Competition in Vienna.

Ms. Tsai believes Music has power of healing, joy, love and peace. She expects herself as a world peace maker through music. One of her life missions is to have a music group for homeless people.