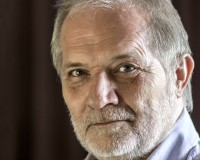 Composer, conductor and teacher: the Hungarian Peter Eötvös combines all three functions in one very high-profile career.  Born in Transylvania in 1944, he has long been considered one of the most significant and influential personalities on the music scene as both an internationally recognized conductor and a composer of successful operas, orchestral works and concertos, written for well-known artists from all over the world. The 2014/16 seasons sees the performances of Eötvös´s new opera Senza sangue, commissionded by the New York Philharmonic and Kölner Philharmonie. Recent premiere include his percussion concerto Speaking Drums, ensemble pieces Dodici and da capo. His new oratorio "Halleluja" will be premiered in Salzburg Festival in 2016, composed on the base of Peter Esterhazy text.

Eötvös attaches great importance to passing on his extensive knowledge and experience to others. He taught at the music college in Cologne and Karlsruhe and gives regular masterclasses and seminars throughout Europe. He established his “International Eötvös Institute” in 1991 and the “Eötvös Contemporary Music Foundation” in 2004 in Budapest for young composers and conductors.

In addition to his roles listed above, Peter Eötvös is regularly re-invited as guest conductor by the most important orchestras and opera houses.

Peter Eötvös is one of the best known interpreters of 2Oth century music. He was born in Transsylvania, rec0eived diplomas from Budapest Academy of Music (composition) and Hochschule für Musik in Cologne (conducting). Between 1968 and 1976 he performed regularly with the Stockhausen Ensemble. From 1971 to 1979 he collaborated with the electronic music studio of the Westdeutscher Rundfunk in Cologne.

In 1978, at the invitation of Pierre Boulez, he conducted the inaugural concert of IRCAM in Paris, and was subsequently named musical director of the Ensemble InterContemporain, a post he held until 1991.

Since his Proms debut in 1980 he has made regular appearances in London. From 1985-1988 he was Principal Guest Conductor of the BBC Symphony Orchestra.
He was appointed First Guest Conductor at the Budapest Festival Orchestra from 1992-1995, First Guest Conductor at National Philharmonic Orchestra (Budapest) from 1998-2001. Chief Conductor of the Radio Chamber Orchestra of Hilversum from 1994 to 2005, First Guest conductor of the Stuttgart Radio Symphony Orchestra 2003-2005, and Principal Guest Conductor, Modern and Contemporary Repertoire at Gothenburg Symphony Orchestra from 2003 to 2007. From 2009 to 2012 he was First Guest Conductor at Radio Symphony Orchestra in Vienna. Other Orchestras he has worked with include the most important Radio Orchestras in Europe, the Royal Concertgebouw Orchestra, Berlin Philharmonic Orchestra, Munich Philharmonic Orchestra, London Philharmonia, Wiener Philharmoniker, Cleveland Orchestra and NHK Orchestra Tokyo. He has also worked in opera houses including La Scala Milan, the Royal Opera House Covent Garden and La Monnaie Brussels, Festival Opera Glyndebourne, Theatre du Chatelet Paris, with directors including Luca Ronconi, Robert Altman, Klaus-Michael Grüber, Robert Wilson, Nikolaus Lehnhof, Ushio Amagatsu.
From 1992-98 he was professor at the Hochschule für Musik in Karlsruhe, and from 1998-2001 at Cologne's Hochschule für Musik. He returns to his post at the Musikhochschule Karlsruhe between 2002-2007.
In 1991 he founded the International Eötvös Institute and Foundation, in 2004 the Eötvös Contemporary Music Foundation in Budapest for young conductors and composers.
He regularly conducts master courses and seminars all over the world, e.g. Paris, Luzern, Basel, Luxemburg, Szombathely, Madrid etc.