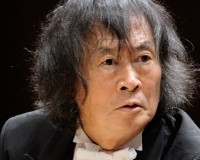 Kobayashi received a commission to compose a work in commemoration of the 400th anniversary of the establishment of diplomatic relations between Holland and Japan in 2000. It was first performed with the Netherlands Philharmonic to a sold-out hall in Amsterdam in the fall of 1999, receiving a standing ovation. In May 2002, he conducted the very successful opening concert of the Prague Spring Festival, the complete “Ma Vlast” (My Homeland).

Ken-ichiro Kobayashi studied composition and conducting at Tokyo National University of Fine Arts and Music. In 1974, he received both the first prize and the special award at the first International Conductors’ Competition of Hungarian Television in Budapest. He received the Liszt Memorial Decoration in 1986, and in 1994 he received the Hungarian Order of Culture and the “Middle Cross with the Star” decoration from the Hungarian government. In 2011 he received the Japanese “Commissioner for Cultural Affairs Award,” and in November 2013 he was awarded the Order of the Rising Sun, Gold Rays with Neck Ribbon.”

In March-April 2014, Kobayashi carried out a tour of Hungary to mark the 40th anniversary of his winning the International Conductors’ Competition of Hungarian Television in Budapest. In June 2014 he will also carry out a tour with the Hungarian National Philharmonic Orchestra in Japan, with performances in Tokyo, Osaka and Iwaki.

Kobayashi is also an emeritus professor at Tokyo National University of Fine Arts, Tokyo College of Music, and Franz Liszt Academy of Music, Hungary. He is also ambassador of Culture, Hungary.