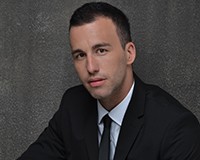 Krisztián Balassa graduated from the class of composition of Szent István Király Conservatory of Music before he got his degree in choral and orchestral conducting at the Liszt Ferenc Academy of Music, as a student of Tamás Gál and András Ligeti, respectively. Already at a young age, he was interested in drama and music theatre; he performed as an actor and singer at the National Theatre and at the Hungarian State Opera.

Between 2002 and 2004 Balassa was a professor of the University of Theatre and Film Arts in Budapest. Since 2006 he has contributed to the programs of the Budapest Operetta Theatre as an orchestral pianist, from 2008 to 2016 he worked for the Operetta as a conductor and accompanist.

Balassa conducted blockbuster productions such as Miss Saigon, Rebecca, Mozart!, Elisabeth, A szépség és a Szörnyeteg (The Beauty and the Beast, A Csárdáskirálynő (The Gipy Princess), Rómeó és Júlia (Romeo and Juliet), Madame Pompadour and Abigél. He was the music director of a number of short operas such as Bohém Casting (Bohemian Casting), Veled, Uram! (With you, Lord!), Kaukázusi krétakör (Caucasean Chalk Circle), Váltságdíj (Ransom) and the Nárcisz és Echo (Narcissus and Echo) along with the operetta, A mosoly országa (The Land of Smiles), and several musicals, including the Ghost, the FAME, and a one-act opera, Egy anya története (The Story of a Mother) that was first performed at the Miskolc Opera Festival. As for the Szeged Open Air Festival, he made his debut there with the Elfújta a szél (Gone with the Wind) production.

He has conducted at gala concerts in Hungary and abroad on a regular basis and with The Beauty and the Beast he has making tours throughout German speaking countries (Cologne, Munich, Frankfurt, Baden-Baden, Mannheim, Zürich, Düsseldorf, Basel). In addition to the Latvian National Symphony Orchestra, he conducted great Hungarian ensembles such as the Concerto Budapest, the Szeged Symphony Orchestra, the of the Hungarian Radio Symphonic Orchestra and the Kodály Philharmonic Orchestra.

Since 2016 Balassa has filled the conductor's position at the Stage Entertainment GMBH in Germany where he made his debut with the Tanz der Vampire (Dance of Vampires) musical by Jim Steinman.