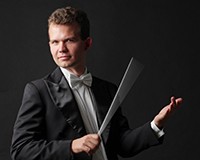 The debut of Balázs Bánfi in Canada was a sweeping success in 2017, when he conducted the Calgary Philharmonic Orchestra and the Strauss Symphony of Canada within the frame of the „Salute to Vienna” program series. He conducted the Wiener KammerOrchester first when he was a graduate student of the Vienna Music Academy; the concert was held at the concert studio of the Austrian Radio (ORF Radiokulturhaus). After his successful debut he was invited to perform at the Konzerthaus in Vienna where he conducted works by Mozart, Debussy and Vasks as well. On the same occasion, he conducted the world premier of the Three pieces for string orchestra by Diego Collatti. Bánfi stepped on stage several times in the Budapest Palace of Arts and at the Music Academy as well.

Between 2011 and 2014 the Szolnok City Symphony Orchestra was worked under his baton, just as a couple of relevant Hungarian ensembles including MÁV Orchestra, Budafok Dohnányi Orchestra, Savaria Symphony Orchestra, the Zugló Philharmonic – King Saint Stephen Orchestra, Danubia Orchestra Óbuda and the Tatabánya Symphony. In 2011, on the occasion of the 60 Jubilee Gala of the Hungarian National Folk Ensemble, he conducted the world premier of the symphonic version of the Ecseri lakodalmas (Wedding at Ecser) by Rudolf Maros.

Balázs Bánfi places a great emphasis on the musical education of young generations. Since 2005 he has filled the position of art director and conductor at the Ritmus Concert Band that – among other awards and prizes – won the 1st International Wing Orchestra Competition in 2010, hosted by the World Association for Symphonic Bands and Ensembles (WASBE).

Bánfi graduated from the Liszt Ferenc Academy of Music in 2009, getting degree in vocal and music teaching, before he pursued his studies at the choral conducting department of the Vienna Universität für Musik und darstellende Kunst which he graduated from in 2012.

„...He exactly knows what kind of sound he expects from the orchestra, making music on the highest standard.”