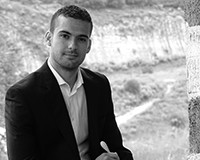 Italian conductor Leonardo Sini began his musical studies at the Conservatory of Music "L. Canepa" in Sassari. In 2013 he gained his Masters degree in trumpet at the Royal Academy of Music in London

where he also commenced his studies in conducting with Sian Edwards. He has recently completed his Masters degree in orchestral conducting in the ‘National Master of Orchestral Conducting programme, studying with Jac van Steen, Ed Spanjaard and Kenneth Montgomery at the Royal Conservatoire in The Hague and at the

He has conducted orchestras such as the Netherlands Philharmonic Orchestra, Residentie Orkest, Noord Nederlands Orkest, Orchestra of the Eighteenth Century, Philharmonie Zuidnederland in different

concerts and as part of conducting masterclasses. Particularly interested also in opera, he has recently made his operatic debut conducting G. Puccini’s La Bohème with musicians of the Netherlands Philharmonic Orchestra and the Dutch National Opera Chorus at the Bredeweg Festival in Amsterdam.

He is the founder and Principal Conductor of the Armonia Chamber Orchestra with whom he performed in different concerts in London and in Italy. In London he also conducted the Southbank Sinfonia performing at the Royal Festival Hall.

Leonardo participated in conducting masterclasses at the “Accademia Musicale Chigiana” in Siena with Gianluigi Gelmetti and at the “Riccardo Muti Italian Opera Academy” in Ravenna with Riccardo Muti. In June 2017 he took part in a masterclass with Daniele Gatti and the Conservatorium van Amsterdam Symphony Orchestra.

Since 2015 he has worked as an assistant conductor with most of the professional orchestras in The Netherlands and many others in UK, Austria and Germany.